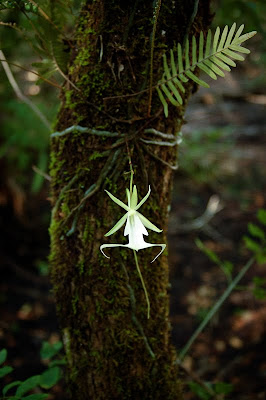 Well, some of the controversy anyway! The beautiful and elusive Ghost Orchid, and its sale at a recent fundraiser turned out to be a topic that drew a lot of impassioned responses from readers with a range of issues.
First of all, yes: it was legal!
Rufino Osorio knew the law governing this action and replied to our question:
"The sale of Florida state-listed endangered and threatened plants is governed by  Florida Statute 581.185. The statute specifically states: (7) SALES BY NURSERYMEN - Licensed, certified nurserymen who grow from seeds or by vegetative propagation any of the native plants on the Regulated Plant Index, as provided in the rules of the department, are specifically permittted to sell these commercially grown plants and shall not be in violation of this section if they do so, as it is the intent of the section to preserve and encourage the propagation of these native plants which are rapidly disappearing from the state."
Rick Ehle, an FNPS chapter president, wrote to express his opinion that ghosts belong in swamps, are impossible for homeowners to grow, and are not appropriate as a means of fundraising.
Most readers disagreed with that viewpoint however, and thought that more ready access to these endangered plants would tend to prevent folks from poaching in the wild. Rich Leighton, from  Leighton Photography, who kindly supplied the lovely photo for this post, agreed with that idea, and added that homegrown ghosts could even contribute to starting new colonies. He knows of two thriving colonies that do grow outside Fakahatchee and Corkscrew, although these are in wild settings. Like Mr. Ehle, Leighton was determined to protect the plant and declined to state the exact location of these colonies. You can see them though, (the easy way!) by following his blog at FloridaNaturePhotography.com.
Several readers, including Mr. Ehle, were concerned about the source of the orchid, worried that a plant not actually native to South Florida was being introduced. (There is a Eurasian ghost orchid, and also a variety that grows in the Caribbean which may or may not be of the same germplasm as ours.) I talked to the staff at Oak Hill Gardens about their source. Oak Hill, a commercial grower located in Illlinois, assured me that their ghosts are seed grown from a plant that was in the Fakahatchee. They have been selling it for over 15 years. We did not get as far down as WHEN the seeds were obtained or if the original plant was still there...
One reader, Chris Stewart, wrote to say, "For some fascinating reading about the orchid world, I highly recommend, Orchid Fever: A Horticultural Tale of Love, Lust, and Lunacy, by Eric Hansen. There were times I was shocked, amazed, infuriated, and awed. It's definitely worth reading."
Sounds like a combination hard to beat!!
And finally, well, there were a bunch in our chapter who couldn't stand the unanswered challenge, and decided to try to beat the odds. We are taking our teeny, tiny little ghosts, all "one inch from root edge to root edge" of them, and trying to follow Rufino's advice about situating. Rufino Osorio, author of A Gardener's Guide to Florida's Native Plants, says that the leafless orchids
"require high ambient humidity (that results from humidity in the air and NOT from being frequently watered), filtered shade, and protection from strong winds. In other words, they require  a swamp or a rain forest...and the conditions found in a swamp or a rain forest are extremely difficult to duplicate in a home landscape."
We believe it, too.  We'll keep you posted!
Thanks to all of you who wrote in, and keep the comments coming - our boxes are enabled now, so click away!
sue dingwell

Florida Native Plant Society said…
Thanks, Cathy; we appreciate your support! Credit really has to go to lots of people for making this article possible. We hope you share it with all your Native friends, and let us know about what interests YOU in the Native Plant world.
May 5, 2010 at 10:49 AM