Edible Native Recovers from the Frost 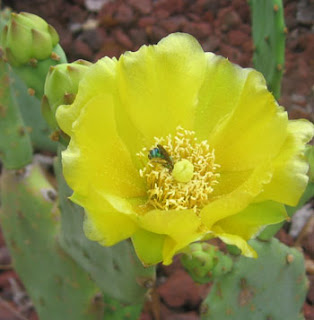 As I surveyed our acreage in north central Florida after the months of frost damage, I wondered if the Opuntia would make a comeback in time to flower. As I walked about, I noticed the cactus pads were flat, “deflated,” and reddish. As the weather turned warm and then hot, it looked to me as if the Opuntia was suffering all the more. And then we received a few spectacular rain storms that seemed to revive the plant from its winter shock. And now the field around our house is covered with yellow blossoms the dog is once again limping toward me holding up his paw for spine extraction.

There are more than 200 species of Opuntia, which is endemic to the western hemisphere but has naturalized worldwide. Our native species include O. humifusa, O. stricta, and the rarer O. triancanthos (tropical), O. pusilla, and O. cubensis (tropical).

Opuntia species are nourishing food for gopher tortoise that luckily lack pain receptors in their mouths. For us the effort to prepare them may outweigh the culinary attraction, although “nopales” have been a traditional food in native cultures in the Western hemisphere and seeds have been found in archeological sites in Texas.

Found on sandhills, in pinelands, and near the edges of dry woods, the plant is easy to identify, especially if you happen to walk into one! Edible species have flat joints (pads) and inedible ones have rounded joints, but there are no poisonous look-alikes (Brill). Leaves are absent, and the edible pads—once the spines and fine hairs (called glochids) are removed—are actually the stems, which store water and nutrients. Tea can be made form the yellow, waxy flowers, which are radially symmetrical and solitary with one pistil. The red pear-shaped fruit, which is also covered with glochids, is edible and medicinal.

Harvest Tips
The pears are best picked when they are young and succulent, sometimes in the spring, but particularly near the end of the summer and into the early fall. When collecting the pads, choose young, healthy, and succulent ones. In Florida usually around the beginning of May, the prickly pear cactus blossoms begin to open, dotting the field with gorgeous yellow flowers attracting all manner of insects and butterflies. Their schedule this year was a little off probably due to the extra cold winter, and they are now finally in full blossom. 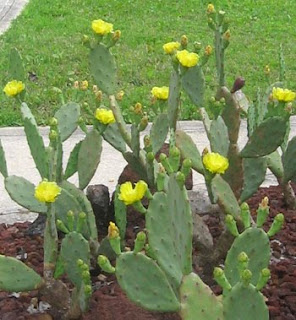 On the Table
You are limited only by your imagination for finding clever culinary uses for prickly pear cactus. Some people liken the taste of cactus jams and candies to strawberries. From the pears you can make juice, which will be red and can be made into a beverage, jelly, or candy. You can add prickly pear pads to stir fry dishes, pasta dishes, salads; make pickles; scramble them with eggs; or add them to soups.

However you choose to use Opuntia, special preparation techniques are clearly in order with this spine-ridden plant. You can “pressure” wash them with a hose, which removes most the glochids but even after that, handle them with care because the glochids are so tiny it is difficult to see if any are left. (The glochids, which lodge in your skin, are not so painful as annoying. To remove them from your fingers, try duct tape or brisk scrubbing with stiff brush.) Alternate methods of removing them from the pads include roughing them up with a dish towel, cutting out the spines, or roasting off the spines.

To collect the juice from the fruit, simmer the pears, mash, and drain. The bright red juice can be made into a beverage, jelly, or candy. You can freeze the juice for later use. To prepare a refreshing summer drink, mix the juice with water (1:1) and add sugar or honey. Prickly pear juice can also be blended with other drinks or seltzer water with a twist of orange. (Note the fruit and juice will turn your urine red!)

The pads can be eaten raw or cooked. Once the spines and glochids are removed, blanch the pads in boiling water to remove the skin. Slice into long thin pieces and simmer in water until tender. Or cut them in smaller pieces and scramble with eggs. Young pads are typically boiled, simmered, or sautéed and older pads are best roasted or dried for use later (Austin).

Although Opuntia is more palatable to some people when cooked, you can eat it raw after carefully brushing off the spines and glochids with twigs or a knife. Then slice the pad and peel back the sides to get at the edible pulp.

The pulp and the fruits can also be dried and stored (in a cool, dry place) for later use.

The seeds (each fruit can contain as many fifty hardy seeds) can be cleaned and dried and ground (use a coffee grinder) into flour that is relatively high in protein (about 12%). and can be used along with conventional flour in baked goods or as a thickener for soup.

The flowers can be made into an infusion that is rich in flavonoids (Knishinsky). Make the tea with fresh flowers or dry them for later use. Harvest carefully avoiding the glochids near the base of the flower, and be sure to strain the tea infusion through fine cloth before drinking. This is a delightful and slightly relaxing and uplifting tea and can be taken warm or cold. Steep the fresh or dried flowers for about 15 to 20 minutes.

Remove the skin from the prickly pears fruits and the banana. Puree in a blender or food processor. Add the honey, vinegar, lemon and lime juices and blend until smooth. Taste and season as you wish. Add more honey for a sweeter taste and more vinegar if you prefer the vinaigrette on the tart side. If too thin add more banana, and if the blend is too thick add a bit of apple or litchi juice. Important: Strain through a fine sieve (or through a handkerchief and a strainer before serving to be sure none of your dinner guests end up with glochids in their salads!

Caution Notes
In one study (Bwititi) O. megacantha, native to Mexico and technically a cholla (and thus in the genus Cylindropuntia, was reported to be toxic to the kidneys. “Green” Deane Jordan, a Florida forager, warns that you should stay away from cacti with milky sap—which are not edible.

Conservation Notes
Opuntia species are endangered from a moth (Cactoblastis cactorum), which has been spreading from the Florida Keys, where it was first noted by Carol Lippincott in 1989. The moth is a voracious eater, and although local farmers may rejoice in the elimination of cacti in fields, Opuntia is a dietary mainstay of people in Mexico and the southwestern United States (Austin) and also a main source of food for the gopher tortoise. So encourage a little Opuntia to grow in your yard and you’ll have a food source while at the same time providing more havens for this versatile native plant.

Adapted from a contribution by Eleanor K. Sommer in The Rhexia (May 2010), the newsletter of the Paynes Prairie Chapter of the Florida Native Plant Society.

Anonymous said…
This is a really good bit of information. I have always known about how cacti are edible and how you can make a variety of different things from it, but I didn't exactly know how or anything. I'm all for native plant species and native edible plants, I enjoy going in the woods and in my yard to observe what I might have growing there and, not to mention, I love gopher tortoises :) This article was very interesting and helpful in knowing about Opuntia cacti.
July 20, 2011 at 1:21 PM