May 25, 2010
Tall Timbers Research Station was originally Henry L. Beadel's quail-hunting plantation. Beadel had no heirs, so in 1958, Tall Timbers Research Station was established. In 1990, the Red Hills Conservation Association was formed as a program of Tall Timbers to conserve working lands that are used for forestry, agricultural, and recreational hunting. It focused its conservation efforts in the Red Hills Region located between Tallahassee, Florida and Thomasville, Georgia. http://www.talltimbers.org/.

The 30-year FNPS members gathered for a photo shoot. Is it a coincidence that this weekend was also the 30th anniversary of Pac-Man? I think not. 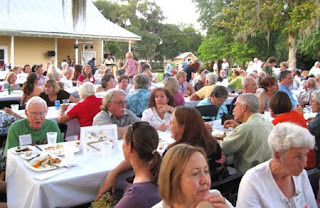 Banquet tables, decorated with copies of herbarium specimens, were set out under a spreading live oak tree. The food was great and the company was fabulous. There were two plant identification contests, an easy one and a more difficult one. We found out the next day that the winner of the more difficult contest guessed only about 50% correctly. Now that's hard, considering this group!

The Weeds provided great rock and roll. There was lots of dancing. The Weeds started playing together in 2000 after many informal sessions at the annual meetings of The Exotic Pest Plant Council. See this document for more information on who they are and what daytime jobs they hold.

And while not officially part of this conference, click here for coverage of the first ever Summit of Southeastern Native Plant Societies
florida native plant conference