April 21, 2010
I found some meadow garlic (Allium canadense) growing in a low spot in my yard. I dug it up and planted it next to my rosemary bush in the herb garden. Over the years, I've found more and have planted the little bulblets that it produces each year and now there's a good stand in the garden. 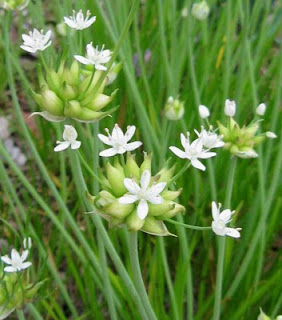 We have a few native alliums here in Florida. The one I have is the most widespread according to Wunderlin, R. P., and B. F. Hansen. 2008. Atlas of Florida Vascular Plants (http://www.plantatlas.usf.edu/). It occurs from the panhandle down to central Florida. The Mobile meadow garlic (A. canadense var. mobilense) is located only in the panhandle counties and has mostly pinker flowers with all flowers in each flower head--no bulblets. The striped garlic (A. cuthbertii) is rare in Florida and occurs only in the eastern-most counties in northeast Florida. It also has only flowers in its flower heads and its petals are narrower and often have a pink stripe down the middle. Unlike the other two, this garlic’s bulb is covered with a fibrous coating.

I just love the meadow garlic's foolproof, wild-haired inflorescence. It includes a few small six-pedaled white flowers, on long stalks, which will produce seeds if properly fertilized. In addition, this plant produces clones of itself in the form of bulblets. While still attached to the parent plant, the bulblet produces its first wiry leaf. As soon as the leaf emerges, it turns green and starts photosynthesizing. The sugars it produces are stored and the bulblet grows larger and heavier. When a bulblet drops, it falls, bulb-side down like a child's toy top. This way the root area is next to the soil and the leaf points upward and can continue to function using the moisture from the bulb until roots grow and bring in moisture from the soil.

Our meadow garlic earned its way into the herb garden for several reasons:

1) The mild garlicky/oniony taste of its leaves works well in salads.
2) Because its leaves are solid, (unlike chives, which has hollow leaves) they hold up well in a stir-fry. We use the bulbs, bulblets, flowers, and leaves in a variety of dishes. I also use a good amount in my pestos. I rarely buy regular garlic from the store these days.
3) It grows well in the drier, sandy soil in the herb garden that's so good for those species from the Mediterranean region. The standard advice for herb gardens is that poorer soil often produces plants with more aromas. I'm not sure if this is an old gardeners' tale or not, but I keep the soil on the lean side compared to my other edible gardens.
4) It's attractive in the garden. The leaves die back in late spring, but come back in early winter and have great flavor at any time.

Sometimes I dig up the whole plant, but most of the time, I clip off the leaves, bulblets or the flowers as needed. I have started a second patch out in the vegetable garden next to the Egyptian walking onions (A. x proliferum). They both produce bulblets at the top of their flowering stems. The walking onions don't produce any flowers that I've seen. These are both perennials in the vegetable garden so keeping them together makes sense amongst all the other annual crops with all of their rotations and plantings.


Meanwhile, I've planted some chives next to the garlic in the herb garden. The chives, garlic, and rosemary are my perennials in the herb garden, and it's good to have them all in one place. That way, as I plant the annuals (basil, dill, parsley, etc.), I know where not to plant new seed.

I love having my herb garden next to the back door. Being so handy, it encourages me to make liberal use of my herbs for cooking, adding flavor and variety to our meals.