On June 12, 2019 I had the opportunity to “shadow” Juliet Rynear and several local and state government representatives on a land management review at Lake Griffin State Park. Lake Griffin State Park is located in Lake County off of Highway 27 in Fruitland Park. The park consists of approximately 621 acres of mesic flatwoods, sandhill, scrubby flatwoods, xeric hammock, basin marsh, baygall, depression marsh, hydric hammock, and river floodplain lake habitats. Although the park is not located on Lake Griffin, there is access to the lake from the park via the Dead River which terminates within the park boundaries. 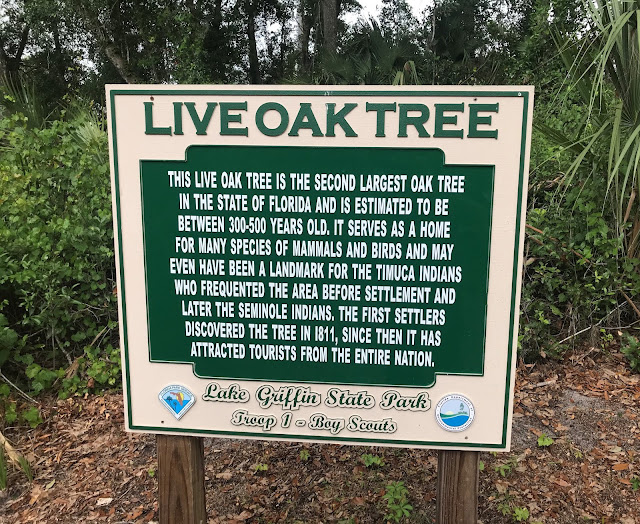 The park primarily operates to provide outdoor recreation to the public. The park is improved with a large parking area that accommodates the parks public boat ramp, providing access to Lake Griffin. The park also provides pontoon boat eco-tours, kayak rentals, campgrounds, a playground, picnic areas, and hiking trails to the public. The park is also home to the state’s second largest Live Oak tree which is estimated to be 300-500 years old!

The park is divided into several management zones. Two of the management zones are located on an outparcel east of the park. This outparcel is separated from the park by residential development, and it takes a 5-minute car ride to get to the site. This is worth noting because this outparcel consists of sandhill and xeric oak habitat which is the location of the park’s parent population of Warea amplexifolia. Additional listed species such as Clitoria fragrans, and Eriogonum longifolium var. gnaphalifolium were observed in sandhill habitat located on the northern periphery of the park’s main tract. While on site, the park biologist informed us that this sandhill area was just burned this year for the first time since its acquisition! There is currently no public access to the sandhill habitat on the northern portion of the main tract, or the outparcel.

After spending the morning walking and driving around the park, we all spent the afternoon going over the management review checklist. This was an open forum for everyone to voice their concerns with any items in the management plan, and discuss potential solutions to these issues.

The main points of the checklist review disclosed the following: The overall presentation of the park was impressive given that the park only has three full-time staff and one part time employee. Invasive plant removal and prescribed fire are part of the park’s management plan. However, there are limitations to their burn schedule due to the proximity of residential developments to the park. The primary issue that was noted and discussed on site however, was that the park does not have legal access to most of the northern portions of the main tract due to recent development. In fact, the only way to access the sandhill habitat on the northern portion of the park is by driving out of the park and accessing an easement which the park has rights to through a “friendly agreement with the property owner.” Without a dedicated easement to this area of the park, there is no way to access it for management activities. The park plans to work with the surrounding property owners to secure a dedicated easement. Other issues brought up during the review included staffing (the park needs double the staff), parking limitations, and security. After a lengthy discussion, several updates to the park’s management plan were proposed to address the issues identified.

Being a part of this process was both rewarding and informational, as citizens are not often given the opportunity to participate in the management of public lands (at least not in such a direct way). I hope that anyone reading this gets the opportunity to participate in at least one of these reviews, as I am sure my fellow FNPS members would make valuable contributions to this process.