I thought I knew my FNPS tribe! We were the rough riders of the Florida landscape that understood natural beauty in a manufactured civilization. But here in Camp Kulaqua (run by Seventh Day Adventists) I found pillows, pressed sheets, and (gasp!) Wi-Fi. Being a city boy this was certainly a welcomed sight as we are all accustomed to so many amenities that are taken for granted every day. That being said, this was certainly not the retreat I had envisioned in my head- chilly nights, encircled around a campfire in the middle of nowhere, listening to coyotes howling away, and cold showers in the morning. This was, comparatively, upscale living.

Friday was an informal social gathering in the evening by the entrance lobby. I did, as usual, hobnob with some other local chapter members. In particular, I had a long conversation with Ina Crawford of Sweetbay Chapter. It was as though the heavens were listening to my prayer as I was hoping for a very long time to connect with chapter member on the far west coast of Florida where things (including the weather) are a bit different from the rest of us in the peninsular area. Ina mentioned that her chapter is but 35 members strong but they still have monthly presentations and field trips. When asked if it was difficult for her to gather presenters to come out to her chapter, she mentioned that her chapter actually has more trouble organizing field trips than anything else. We talked about a lot of various subjects including our love for the wildflower blooms along SR 65. We spoke about getting more kids involved with plants at great length and making inexpensive craft projects to help them develop an ongoing interest with nature.


I also met with Gail Taylor of Crystal River’s Citrus Chapter. This chapter is in the middle of a total revamp and she had some great ideas for advertising such as buttons which cost her just $30 for 100 buttons Gail was a fountain of new ideas ranging from ideas on yard signage, clear table cloths for plant sales, to attracting “snowbird” memberships.

The Brochure is Alive & Well, Thank you

Saturday was packed with presentations- including Richard Brownscombe of Broward County’s Coontie Chapter. Donna Bollenbach of Suncoast Chapter, Richard, the Chapter of Council Landscape 101 Committee, and many others, worked together to create a beautiful folded brochure on native landscaping. The first of six versions is for the West Coast Region (Pasco through Collier counties). This has been sent to selected FNPS members for final review, and if all goes well, Donna will be putting together the other 5 regions (which are delineated on the FNPS forum webpage) in the next few months.

Craig Huegel has written an introduction in the brochure and there will be tips for native plant landscaping. There will be on-line references, such as our the FNPS website, that will motivate interested readers to further resources.

These brochures will cost FNPS about $0.30 each to print. Richard has recommended that the chapters sell the final product at $1 per brochure to pay for future printing. Andy Taylor (FNPS Director of Development) and Richard will seek out $20K in funding to do 60,000 copies statewide.

Shirley Denton (Chair of the Communications Committee) has been looking into a software program for an automated system for logging volunteer hours. Everything that we invest in volunteering (from driving to an event, to a board meeting, to working at home individually for FNPS tasks) is valued at $23/hour!

Juliet went on to cite some other data:
Most of this information was put together thanks to members who responded to a survey, or by information gathered from the FNPS website calendar. Juliet hopes that these facts help members prepare a “Two-minute elevator conversation” to spread the word and scope of what our society is achieving. She hopes that similar data in the future will help all chapters to grow.

Jonnie Spitler from Nature Coast Chapter presented some additional data put together by Cammie Donaldson’s (FNPS Administration) team. In 2014-2015, the Villages Chapter got 113 members, however FNPS as a whole only gained 56 memberships in total.

Jonnie emphasized enthusiasm, inclusion of novices, and being persistent on getting new members to join chapters. Her own chapter has seen rapid growth due to her efforts- from 30 members to about 65 members total. At her chapter meetings, she said everybody begins the meeting by saying FNPS mission statement akin to an anthem. Jonnie mentioned that it’s very important to validate newcomers in front of the entire crowd every single month. When renewals are due, her chapter sends 3 courtesy reminder emails. This strategy has successfully worked for her chapter- Jonnie has reported new members joining her chapter almost every single month.

Jonnie also emphasized in her presentation how important it is to have a fun meeting by engaging with people and encouraging happiness. She mentioned that even though FNPS can be science-driven, we should not forget the fun element in a meeting because that’s what will gain the most memberships from “common folks.”

In the future, Jonnie will be in closer communication with other chapters on membership. She will be giving away prizes for the chapters that have risen most in percentage or numbers. She will keep pushing and focusing on membership at the chapter level, and if the chapter does not have a membership point of contact, she will start reaching out to each chapter president.

Gail Taylor, in her revitalization efforts for Citrus Chapter, mentioned that she hands out a welcome packet to new members. Each packet contains a Chapter Newsletters, native plant articles, resources, places to find natives, and more. Gail also sends out a ‘Thank You’ card to new members, as well as people that bring refreshments at the meetings. Just like Jonnie, Gail validates new members in front of her own audience but she also gives new members first choice on plants that are presented for the plant drawings. She hopes that through this visual cue, visitors will be encouraged to return.

Shirley Denton is busy gathering data on membership through the CiviCRM program. She hopes that through understanding our members more, we will be able to efficiently gather and connect with the right resources needed for any given project. For example, Shirley mentioned that she has gathered some information on who in the membership is a Master Naturalist, or a Master Gardener through the data, but it is based on an outdated 1998 membership survey. Members who would like to share information about themselves to help the society can reach out to Shirley Denton directly.

Andy Taylor, FNPS Director of Development, did a presentation on elected officials and policy. He mentioned Google Alerts which can be found at google.com/alerts.  Basically, you search for any name of your local or state elected official, or a subject, and google alerts will email you current news and articles about that subject. For members who are leery of clogging their email inboxes with multiple google alerts, they can set it up once a day (such as at the end of the day when things have quieted down) in a single lump sum notification.

Andy also gave the following tips when dealing with local and state officials: 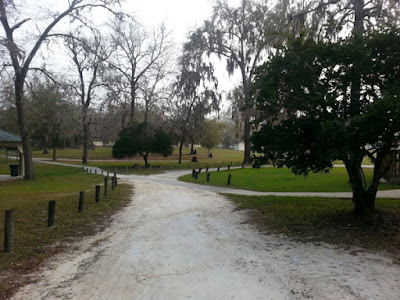 In conclusion, I did enjoy my time at the camp and extended my native plant family even further.

If you do make it out to Camp Kulaqua (this is at least the third time FNPS has used this facility), please be advised that due to their religious policies, no caffeinated products (coffee, tea, or soda) are offered. If you are a coffee drinker first thing in the morning like myself, please plan ahead by bringing your own supplies- including your own coffee mug. It will also be wise to locate the nearest hot water outlet or coffee pot in the vicinity before your crabbiness gets the better of you come morning time.
The meals were above average, with a healthy assortment of fruit, vegetables (fresh and steamed), starch, and protein (fish for lunch, chicken for dinner). I also recommend planning ahead with some additional snacks as dinner was too early for me (5:30 pm), and meals were only available from Saturday morning until breakfast Sunday.

Do attend presentations and meetings, and take notes, but try to go out of your way to connect with other chapter members- after all, we are on the same journey and only together will we be able to make ever-bigger strides.

Unknown said…
What a great article, Mark; so full of detail and information. I felt like I was right there. Thank you for sharing your experiences with us. -Roger Agness, Orange County Tarflower Chapter
March 25, 2016 at 10:57 PM