November Board and Council Meeting at Disney Wilderness Preserve 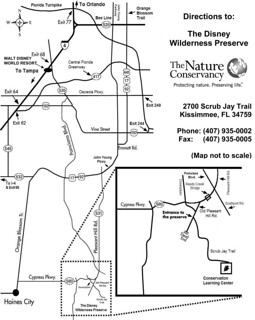 We got lost on our way, but finally made it to the Disney Wilderness Preserve late Friday afternoon. A quintet of wild turkeys ushered us in as we navigated along Scrub Jay Trail en route to the Conservation Learning Center. Petra Royston showed us the lovely room that the Board and Council would be using on Saturday for our meetings, then handed us a map and pointed out where our accommodations were, noting the trails nearby. After dropping off what we'd brought for the business portion of our trip, the eight of us piled into the two vehicles capable of driving on the unpaved road to the "dorm" we were staying in without getting stuck. "Dorm," as it turned out, was code for a double-wide trailer that had once served as the Preserve's offices. It had several rooms of beds, some bunked, a small kitchen, two bathrooms at the end of the hallway (one labeled "ladies" and one labeled "guests"), and two gathering areas with kitschy and unusual knick-knacks (among these were a centrifuge, a plastic horse statuette, and a candle carved into a tiki man). It was no Four Seasons, but for $20 a night we were more than satisfied.

We entered the trailer and called dibs on beds then went about getting settled in. A few people went to the grocery store, and the rest of us remained at the Preserve. I decided to make the most of the remaining hour of sunlight and headed out to the red trail loop, along which I was told I might see some scrub jays. The trail was not lengthy, but the sand under foot made a brisk walk nearly impossible. As I plugged along, however, one of the positive attributes of sand became quickly apparent: its ability to record tracks! Over the next two days I found wild turkey tracks, raccoon tracks, deer tracks, and the tracks of what looked like a large cat. Exciting! 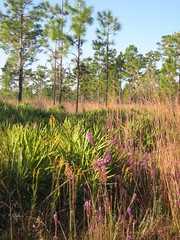 I meandered through a landscape of longleaf pine (Pinus palustris), dwarf palmetto (Sabal minor) and  bluestem (Andropogon sp.) freckled yellow and purple with goldenrod (Solidago sp.), silkgrass (Pityopsis sp.), gayfeather (Liatris sp.), and chaffhead (Carphephorus sp.) until it got dark. Suddenly, a voice shouted out from just behind me. It belonged to Richard Brownscombe, who seemed to appear out of nowhere. I waited for him to catch up and we walked the main grade back to the dorm together, both of us visibly excited to be staying in such a beautiful place.

Back at the dorm, the whole gang stuffed their faces, chatted about everything from politics to plants and pop culture, and, one by one, wandered off to bed. 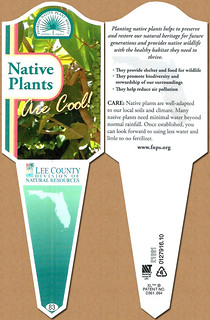 By 10 o'clock the next morning the Education Center had filled up with members from all over the state. Anne Cox, F.N.P.S. President, pointed out a poster that I had drawn by hand and pinned up on one side of the room. It depicted our organization graphically - as composite flower - and will be featured in the upcoming Sabal Minor (so keep your eyes peeled). "It is the first org chart we've had in a long time," Anne said, "and isn't it beautiful!?"
Next Marlene Rodak shared some exciting outreach news. After noticing that the staff at most big box nurseries were unable to identify which of the plants on their shelves were native, she enlisted the financial help of the Lee County I.F.A.S. Extension office and had Mastertag produce native plant tags. With the nurseries' permission, Marlene has regularly gone in and placed a tag in each of the native plants they have in stock. Nice work!

Our guest speaker, Russ Hoffman, then took the floor with a presentation about Ecopsychology. For a detailed account of his lecture, click HERE. We broke for a fabulous potluck lunch at around noon, then started the business portion of the day.

While the Board met inside of the Educational Center, Council members broke out into their initiative groups: (1) promoting landscaping with native plants, (2) enhancing educational field trips, and (3) developing strategies & advocacy for land use planning to address habitat loss. Several hours later, the Council and Board adjourned for the day, and Nature Conservancy staff member Petra Royston took us on a guided swamp buggy tour of the Preserve.

The buggy placed us just high enough to see over the scrub and truly take in the magnificent landscape. Petra gave us some background about the Preserve while we rode. Apparently it encompasses 12,000 acres, the initial portion of which was donated by Disney to mitigate for expansion. With the help of the Nature Conservancy's team of ecologists, the property has been restored to what is believed to be its original state. Non-native, invasive species have been eliminated, fire-dependent habitats are maintained with controlled burns, and excessive scrub and trees are removed mechanically.

We passed by a few atmospheric monitoring stations, all of which looked like giant erector sets, and several active Red-cockaded woodpecker nests. These birds are endangered in Florida, partly because of their very specific habitat requirements: they make their cavities in old growth longleaf pines, which were logged here extensively for many years. Petra also showed us an artificial nesting cavity that has been used successfully in areas without older trees.

We caught the beginning of sunset from the buggy, then winded our way back to the Education Center. Everyone but the overnight crew hurried back to their respective homes throughout Florida. Those of us who were sleeping on site ate potluck leftovers for dinner and enjoyed each other's company for another evening.

After a short hike Sunday morning, we all pitched in and returned to dorm to the state it was in when we arrived. Then we said our goodbyes and got on the road. After dropping off Marjorie Shropshire, Anne and I spotted a gopher tortoise in the middle of a busy south Florida intersection. I hopped out of the car and grabbed it, then started walking and looking for a burrow to return it to. With no hole in sight, I got back into Anne's truck and put the tortoise at my feet, where it promptly crawled under me and hit the bar to move my seat backwards, then defecated several times on the floor. Oy! Anne drove to a nearby natural area and pulled over to the side of the road, at which point I carried the tortoise across the street and into the woods while it urinated on my leg. I'll end this story on the following note: you can take a F.N.P.S. member out of a Preserve, but you can't take the preservation instinct out of a F.N.P.S. member.
Disney Wilderness Preserve FNPS Board of Directors Laurie Sheldon