I’m a firm believer in themes - both as literary devices and design tools. Themes provide one’s ideas with structure and organization, and assist in the creation of meaning, whether expressed linguistically or artistically. That said, when I realized that this blog was to be posted on Thanksgiving, I felt the need to write something relative to the holiday - a thematic piece. Naturally, I put way too much time into finding a topic that could be both compelling and informative.

First I considered exploring the connection between the Pilgrims and the Native Americans as a means of transitioning into some deeper statement about natives in general. A day of research later and I tossed that idea out the window. Truth be known, the REAL Thanksgiving story isn’t half as lighthearted as the one we’re taught in grade school, and, quite frankly, I’d rather not be “Debbie Downer” on a national holiday. 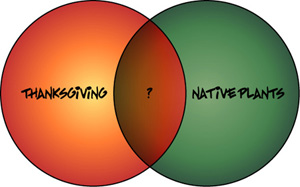 The advice I was given as a design student - “K.I.S.S.” (keep it simple, stupid) - kept coming to mind. I stepped back and thought about Thanksgiving and native plants in terms of symbols, hoping to find an overlap for critical examination. A nightlight-sized bulb flashed on in my head, and the next thing I knew I was driving, camera on the passenger seat, in search of Quercus laevis - the turkey oak.

My first (and only) stop was the Jacksonville Arboretum. I’d only been there once before, and admittedly, I wasn’t paying much attention to the plant communities on the property. In fact, the only things I was sure of were that I had a better shot of finding turkey oak there than where I live, because the site’s elevation is higher than that of my beachside neighborhood, and it is miles from the salt spray that the tree is intolerant of. Nonetheless, I was on a mission, and time was quickly fleeting. I planned to leave the next morning to be with my own family for the holiday, and I knew that I would neither be up to writing a blog after driving 300+ miles in high volume traffic, nor would I have the opportunity to write on Thanksgiving Day because I already had a full schedule of family activities.

After parking, I made a bee-line toward the trailhead, where I learned that the Arboretum wasn’t always a place where one might go to commune with nature. From 1944 through 1961, the 120-acre site was used for strip mining. It was purchased in 1970 by the City of Jacksonville to meet the buffer requirement for an EPA grant that would help fund the construction of a water treatment facility in the area. For the next three decades, the site saw few humans, save for some illegal dumpers, and Mother Nature was allowed to run the show. Finally, in 2004, a group of citizens expressed an interest in the property’s potential as a natural recreation area, and by 2006 they worked out a deal to lease the site from the City. Two years later, in November of 2008, the Jacksonville Arboretum and Gardens officially opened to the public.  All of the trails, benches, boardwalks, and picnic tables in the Arboretum were built by community volunteers.

With one of the trail maps in hand I got on my way. The sun was bold in the cloudless sky but the tree canopy above pinned down a layer of cool comfort; it was a perfect day for a hike. Lake Ray, just 100 feet ahead of me, begged my attention and pulled me in for a closer look.

"Back to business," I thought to myself, and returned to the Lake Loop Trail. Not ten seconds later I was sidetracked by what looked like a gopher tortoise burrow, then again by a tree with ties to Christmas - the native chestnut or chinquapin, Castanea pumila.
I wound my way around the lake and veered left on to the Live Oak Trail, where I hoped to find that elusive turkey oak. No dice. The vegetation was dense - sparkleberry (Vaccinium arboretum) and two species of Lyonia flanked my left and right sides while long, meandering caudeces of Serenoa repens formed angles across the foot path. Live and laurel oaks, stunted by the lack of nutrients in the sandy soil, formed a broken canopy overhead, allowing just enough light in for an abundance of lichens to grow.
I reached a wooden footbridge - the entrance to the Rosemary Ridge Trail - and noticed a slight shift in the vegetation. Grasses held a place here where previously I'd seen none, and the tall bushy bluestem (Andropogon glomeratus) listed in the breeze. I was passing over a tiny finger of Jones Creek. The nature of the plants shifted several more times along this trail; their subtle transitions seemed to wash over the landscape. When I finally reached a small gated area I spotted a wholly foreign scene - now THIS was exciting! Pale green and silver reindeer moss (Cladonia sp.) covered the area in a fluffy blanket and looked like what a puppy might be sitting in the midst of, after investigating the inside of one's couch cushions. It was beautiful.

Just a few steps beyond it, a clump of Florida rosemary (Ceratiola ericoides) sprang from a sandy patch of ground. Another new species for me! I was snapping photos left and right when I realized I still hadn't come across any turkey oak, and it was starting to get darker out.

I decided I should probably start making my way to the car, and (sigh) come up with a different subject for this blog. On my way out of the arboretum, I stopped for a moment to look back at Lake Ray, and came across a familiar, prickly vine: Mimosa quadrivalvis, or sensitive brier. It brought back memories of my childhood summer camp, where I was first introduced to touch-me-nots, and subsequently felt the need to find and touch as many as possible. I reached out and touched the sensitive brier, watched its leaves slowly fold up, and realized what I needed to write about. It wasn't a plant profile or a political statement. It was about being thankful for this state's extraordinary natural areas, for the mild winters that invite outdoor exploration, for the sense of wonder that wells up inside of me when I find a plant whose identity eludes me, and for the members of this organization who've familiarized the unfamiliar and helped me chip away at the unknown.