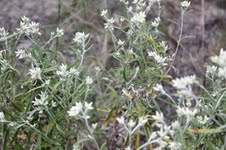 “What is that sweet smell?” I wondered, as I walked the trail on our property with our lumbering Lab, Max.  Just a subtle, gentle odor of something recognizable; perhaps the dog brushed against something as we walked. Ah, then I noticed it—Gnaphalium obtusifolium, recently renamed Pseudognaphalium obtusifolium, and commonly called sweet everlasting. This is one of my favorite end-of-summer native species of the Asteraceae family. And it’s more than a fragrant delight. Sweet everlasting has a solid history as medicinal ally. Linnaeus named this genus in 1753, according to Daniel Austin in Florida Ethnobotany. Native people mixed the plant with smoking tobacco, and even Julia Morton in Folk Remedies of the Low Country (1974) noted its use in pipes by “old timers” in the southeast.

Sweet everlasting is notable near summer’s end and reaches 24 to 36 inches. The leaves are alternate, narrow and lancelet, lacking stalks. They are green above, white and hairy below. The difference between the top and bottom is striking.

Although sweet everlasting is aromatic and inviting, it makes a rather bitter tea and it is quite astringent. Morton wrote that sweet everlasting was the most common native cold remedy in South Carolina, where it was widely taken as tea sweetened with sugar or honey. In the American EclecticDispensatory (1855), King noted that the leaves and flowers, when chewed and swallowed relieved sore throats and mouth ulcers. Morton also noted that the plant was often boiled with pine tops (Pinus palustris) and wax myrtle (Myrica cerifera) or salt bush (Baccharis halmifolia) or gallberry (Ilex glabra) or mullein (Verbascum Thapsus) and to used treat colds or flu.

Modern herbalist Matthew Wood tells us that sweet everlasting was and still is an important Cherokee medicine, and he shares intriguing bits of folklore in The Earthwise Herbal (2009) about how this plant received one of its many nicknames, “rabbit tobacco.” He writes at length about its use in respiratory ailments including asthma. Wood suggests harvesting the plant after it declines (based on, he writes, a spectro-chromatograph study by Alabama herbalist Dwight Collier), noting that the flower tops hold their scent. It would be interesting to dig deeper into the ethnobotanical lore to see if indeed the native people of the southeast used the plant after it had died, or if it was perhaps picked and dried.

Historically, sweet everlasting has also been used a “strewing” herb, which means it was thrown onto floors or placed around indoors areas to keep a fresh scent in the air before the advent of hardwood floors and disinfectants,  and stuffed into pillows as well. It’s easy to see why as the aroma is intoxicating. Gather some soon before it disappears into the autumn shadows.

Terra Mirabilis said…
Will it grow in South Florida?

Florida Native Plant Society said…
Hi Penny, while we are waiting for Eleanor, I would like to just let you know of a great site where you can get many questions about native plants answered:

You can search there for plants by scientific or latin names, see what they do, how to care for, and places they live. Great site.
October 4, 2010 at 2:01 PM

Terra Mirabilis said…
Thanks. I do use the IRC website, but this plant, Gnaphalium obtusifolium, isn't listed...

Ginny Stibolt said…
The prime reference I use is the Florida Plant Atlas. Here is the listing for sweet everlasting:

Terra Mirabilis said…
Thanks so much. Now I've just got to find it ...

Florida Native Plant Society said…
Well, the hunt can be part of the fun! In case there is anyone who doesn't already know, you can search on AFNN.org for native plants. I checked- none of the retail sources are listing sweet everlasting. However, calling a native nursery to let them know what you are looking for can sometimes yield results. And don't forget all the great suggestions Rufino gave here last month:
http://fnpsblog.blogspot.com/2010_08_01_archive.html
October 5, 2010 at 8:11 AM

Eleanor Sommer said…
I believe that it is too wet and humid for sweet everlasting in South Florida. But the Atlas of Florida Vascular Plants indicates the plant has been vouchered in much of SF. So try it, but look for a dry, sandy location. Up here it is abundant in the scrubby sandhills. And as usual the botanical names are changing faster than any of us can keep up -- so the genus is now Pseudognaphalium! -Ellie
October 7, 2010 at 11:13 PM

Terra Mirabilis said…
Thank you, Ellie. Since we're on oolitic limestone here, it may not like my yard. I would love to find a native plant that has a pleasant scent and could be used as a "strewing" herb. I'm a Brit and in England, my favorite wildflower was meadowsweet (Filipendula ulmaria), which has all the qualities I'd love to find in a plant here. If anything comes to mind, let me know. (pennymccrea AT gmail.com) Thanks.

ashleigh said…
Everywhere except swamp and savanahs its actually a native and grows wild in most of Florida see prairie moon website
March 29, 2013 at 7:31 PM