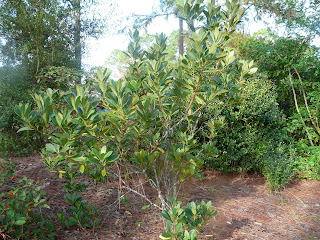 A study funded by money awarded from a Florida Native Plant Society Research Grant was selected for publication in the prestigious American Journal of Botany this September. Two biologists from the University of Alabama, Darah Newell and Ashley Morris conducted extensive research in Florida on an endemic plant, the Illicium parviflorum, commonly known by the name Yellow anise.

The big money usually goes to the rarer plants, says Shirely Denton, an FNPS board member.

What is unusual with this award is that the plant being studied is not rare, exactly, although it is on the Florida Department of Agriculture’s endangered list. What’s of interest in this case is that the plant's most common way of reproducing itself is not by setting seed, but by a  clonal, or root sprouting, method. So a cluster of Illicium p. might be offspring of only one parent plant. Adding to the interest is that Illicium p., although occurring naturally in a limited range in Florida, is both  highly adaptable, and easy to propagate; so the nursery trade has spread its existence widely throughout the our state and beyond.

The plant is endemic to Florida, meaning it occurs naturally only here, but it is being sold as far away as North Carolina and Arkansas due to its popularity in the horticultural trade.

The problem under consideration was whether or not the future of this plant, and others like it, would be hampered by lack of genetic diversity that may be present now, and perhaps exaggerated by  the spread of the genetically similar plants in the nursery trade. Typically nursery stock from cuttings comes from only one plant. So all the new plants are exactly the same genetically.


Extensive habitat fragmentation and degradation, exemplified by events here in Florida,  means that plant communities become smaller due to disappearance of space. And they are often separated by great distances from one another. This means that the gene flow becomes limited. What the researchers feared is that the lack of opportunity for plants to maintain genetic diversity, combined with the proliferation of genetically similar plants in the trade could lead to genetic inbreeding depression. This fancy term just means not enough diversity to keep things healthy. Think of the European royal families who married off close family members to each other to keep the crown in the family. This practice causes unhappy results in all things living.

Illicium parviflorum, an evergreen shrub endemic to the Central Ridge system has small, pendulous, tubular  flowers which are pollinated by correspondingly tiny flies. The size of these flies makes cross- pollination even less likely for the plants in separated communities.

The researchers wanted to study the genetic structure of the plants so that they could obtain some insight into the range of  diversity now in place. They sampled from six locations in Florida, aided by data provided by FNAI, Florida Natural Areas Inventory. From each site they took 20 individual stems which were placed in silica gel desiccant for rapid preservation of the DNA. A single "voucher' specimen was also collected from each site, and those were deposited in the University of South Alabama Herbarium.

Samples were also taken from nurseries. Two of the nurseries were in Alabama and Georgia, and from Florida, plants from University of Florida and from Chiappini Farms Native Nursery in Melrose.

After the samples were taken back to the lab, the language becomes more fascinating and less immediately understandable to the reader who is not immersed in the field of biological sciences. I read with great interest that the newest markers of DNA are actually microsatellites. Thinking these must be tiny devices implanted inside the plant to transmit molecular information, I looked up a definition, and found instead that microsatellites are short segments of DNA that have a repeated sequence. If you want to read the entire article, you can find a PDF on the FNPS.org homepage, down at the bottom. The Florida Native Plant Society is mentioned on the first page as one of the funding sources.

The story is not completely over. The work done in this study has laid a foundation for the research that comes next, now that some basis has been established for the understanding of the genetic makeup of the population. So little is known at the scientific level about our endemic plants. As we have mentioned in this blog before, research money is handed out much more prolifically to the study of plants traditionally a source of income for various interested groups, mainly ornamental and agricultural plants. Our society can be proud of the assistance we are providing for study of natives as the imperative for biological diversity is revealed.

On a lighter note, I brought a yellow anise home from an FNPS conference one year, and it has been a sturdy grower, surviving four direct hits by hurricanes so far. After I watered it in as a transplant for a month or two, it was never watered again nor touched with chemicals of any kind. Here you can see how the bark encourages lichens. And when I went out to take the photos for this piece, I stuck my camera down to take a close-up of the leaves and came face to face with the tiniest little frog I had ever seen. I held my breath while I clicked the shutter, hoping he would hold still for one millisecond. He did, and here he is, a Hyla squirella, named not for his treetop antics but for his rain call. 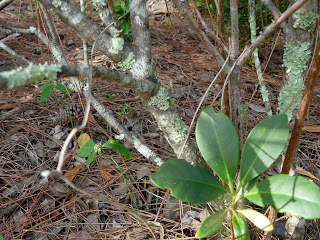 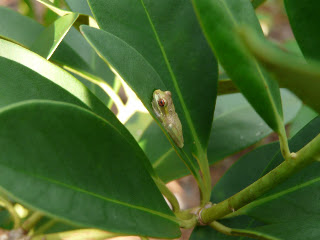 By the way, are you a member yet? You can join up over on the Homepage, FNPS.org. We need you. The plants need you. The tree frogs need you, too. Join the happy throng, become a member of the Florida Native Plant Society, you'll be glad you did.

Cynthia Maguire said…
Thanks for a great read, Sue, and for supporting native plant research, too!

Florida Native Plant Society said…
Cynthia, thank you so much for your comment. It was a marvelous challenge to make the research, so intrinsically interesting to the scientist, a good read for the folks who aren't. I'm glad I succeeded for at least one person!
Thanks for visiting our blog, and for your work for natives in the great state of Texas. We visited Palo Duro for the first time and loved the wildflowers there last June. sue
October 31, 2010 at 9:53 AM