Being True to Place 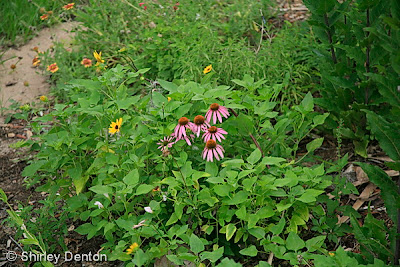 Many people enjoy planting “odd” things in their yards. In the world of native plant landscaping, this has often meant planting things that seem unusual … and what this has often meant is planting species that may be “native” based on occurring naturally somewhere in the state or in some landscape other than the one we’re working on. I’ve been there. Sometimes, I still can’t resist the beautiful plant in a pot that is being sold at the latest native plant sale. But, over time, I’ve had the opportunity to rethink this.

I began landscaping with native about 30 years ago. At that time, I owned a home in southern Michigan. All lawn and old field weeds – about two acres of them. I went on the warpath against mowing by converting much of the lawn to old field and then began planting trees which I gathered locally, often from uncleared parts of the property. Many years later, after I’d been in Florida for about 10 years, I got a call from a woman who had bought the property and tracked me down – she’d bought it largely because those trees had grown and were far more healthy than the standard nursery stock which neighbors had attempted to grow. 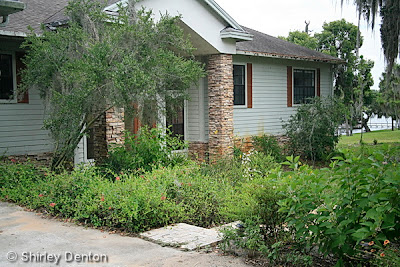 I learned again in Florida. I live in the central part of the state, and friends give me “special” plants from elsewhere in Florida. Sometimes they live, but occasional freezes take a toll on the plants that belonged further south. Plants that prefer more moisture than my yard provides almost always die (I don’t opt to water them once established). Some grow slowly.
Eventually, I developed a philosophy of gardening that focuses on planting the things that belong here. I had an advantage in that my land mostly has natural soils, soils that developed here on the site and which were not brought in as fill.

1. I looked at the physical location: soil (very sandy, very well drained), east facing steep slope, a small wetland area along the lake. I looked at residual vegetation on my site and my neighbors sites (live and sand live oaks, pignut hickory, red bay, laurel oak, sabal palm as trees; occasional beautyberry, Cherokee bean, and laurel cherry as shrubs; some St. Augustine grass and basketgrass in shady places, some wild petunia). Otherwise, thickets of non-native, non-nice weedy species. I tried to build a picture of what must have been here before the hilltop was converted to orange grove and the area closer to the lake was partially cleared. 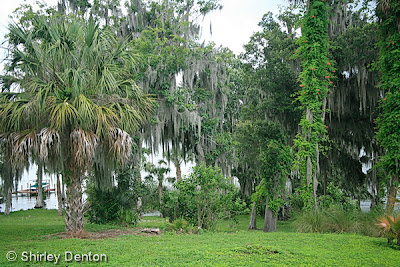 2. I then used what I saw to estimate what was most likely here back before it was farmed: likely sandhill in the old grove, mixed hardwood forest on the hill, and a narrow cypress fringe along the lake.
﻿﻿﻿﻿
﻿﻿﻿﻿﻿
﻿

3. I then assessed what could be here. Putting sandhill back could be impracticable – it is a longleaf pine dominated forest with a grassy understory that depends heavily on fire. I doubt my neighbors would be appreciative. I decided that scrub and xeric hammock would likely do well without requiring the fire. The mixed hardwood forest has more potential, sand live oak, hickories, red bays, southern magnolia, red bud, and many other species can grow here without requiring unacceptable management practices. A large number of flowering shrubs and small trees are also appropriate. I try to stick with those native close by, though I do admit to occasional plants from further north. Coonties and saw palmettos are favorites. I grow annuals and short-lived perennials tolerant of dry conditions – I can’t provide the deep shade that would once have been present. I avoid species that need acidic soils or lots of water.

﻿﻿﻿﻿﻿
﻿﻿﻿﻿﻿ 4. Within this setting, I try to plant a palate of plants that is visually appealing, that attracts wildlife especially birds and butterflies, and is diverse.
5. I plant few non-natives (I just can’t throw away that Easter lily, and I do want my parsley and basil herbs!), and I never plant invasives.


6. Once plants are established, I don’t supply supplemental water.
﻿﻿

﻿﻿
﻿﻿ 7. I try to be a good neighbor – I try to keep my landscape looking somewhat civilized even though my personal taste runs to wild.


Clearly, these are personal preferences. But they demonstrate one of our Florida Native Plant Society mantras – plant “the right plant in the right place.” I like to think that I’m bringing back some of the character of the landscape that may once have been here. I am rewarded with butterflies, humming birds, low water use, and flowers much of the year.
﻿﻿ ﻿﻿
﻿
﻿Shirley Denton
butterfly gardening Florida native plant Florida-friendly

Loret said…
Eloquently described and you set an example to which I hope to obtain!

I too kept trying to plant natives that weren't necessarily happy in my ecosystem but have pretty much changed my tune. I've been rewarded by letting nature do most of the planting with the biggest exception being a new native tree purchase each year in January for Florida Arbor Day.

I still bring home an occasional try at something for the butterfly garden or to surround the flagpole, but that is mostly as a purchase at a native plant sale or similar.
October 18, 2010 at 12:45 PM

I too have coveted beautiful plants outside their native range, but have now resisted, and try to keep things local. Some resources that may help folks figure out what is native to their area include: The Native For Your Neighborhood Website at http://regionalconservation.org/beta/nfyn/default.asp which gives you data on plants by zip code (only works for the 10 southern counties though) and Univ. of South Florida's Florida Plant Atlas at http://www.florida.plantatlas.usf.edu/ which gives you data by county. Be aware though, that some plants cultivated outside their native ranges are beginning to spread, and are still indicated as native to Florida (eg. Sycamores in Highlands & Lee counties).
October 19, 2010 at 8:58 AM