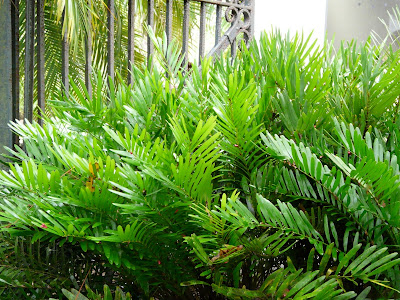 These perky natives have numerous and endearing charms. Authors and growers disagree about the proper Latin name, but they are in complete agreement that more people should use more coonties in their landscapes.


Coonties are spritely and graceful in their form,  tough as the dickens, bright green all year, and host plant for the beautiful blue atala
hairstreak butterfly. In fact, coonties are the only larval food for atalas. You can use them as specimen or accent plants, mass them together for ground cover, or use them in a line as a border. And to top that off, they have an interesting sex life. A subject we hardly ever get to talk about around here. More on that later. See more in Roger Hammer's 1995 Palmetto article, The Coontie and the Atala Hairstreak.

Slow growers, coonties are more expensive to buy than some other natives by relative size, but don't let that put you off. They are well worth the investment. They can be planted in full sun or fairly deep shade. They thrive in a variety of soils, preferring some organic content, but doing okay in nutrient poor soil, too. They have a high tolerance for salt winds, although they don't like to stand around in salty or brackish water. They don't like to be in any soil that is continually moist. One of their big assets is that they are extremely drought tolerant once established. They can be from one to three feet high, and eventually they grow as wide as they are tall. Some older specimens have reached greater heights, but in general, in the home landscape, you can count on them holding on at about three feet.

Coonties can be susceptible to sooty mold or scale. However, this is easily controlled. Just whack them back to the ground, dispose of the scaly leaves, and the plant will merrily re-generate. Same thing if the atala babies eat them up; just wait, they come back.

Their regenerative ability is due its tuberous root, or underground stem. (By the way, the size of the root is what makes it difficult to transplant older specimens.) This root was once a source of food in Florida, but don't try it at home - it needs special preparation to remove cycasin, a poisonous substance. The Calusa and Timucua, pre-Seminole Native Americans, learned  how to macerate and wash the coontie tubers to make bread.

In the mid 1800's the root was milled at a plant down in Miami by the ton for the starch it yielded, decimating native populations which were once abundant. Later the plant was "discovered" by the landscape industry, and it was nearly curtains for the coontie. Now, it is protected in the wild, and happily, it is widely available from growers. 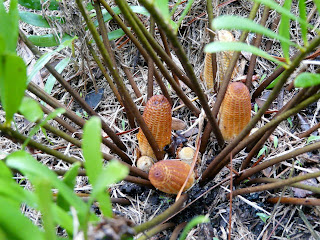 Were you wondering when I was going to get the sexy part? Here it is.  Male and female cones are present on separate plants. You don't know the plants' cone sex until they reach adulthood, usually between three and five years old. Then it all becomes obvious. Not only do you need male and female cones for seed-making, you also need one specific weevil, the Pharaxonotha zamiae. The weevil first eats the starchy male cones and then moves on over to the females where fertilization takes place. Next the female cones swell, the seeds become a vibrant orange color, and eventually the cones split apart, that is, if the birds and squirrels do not get to them first. 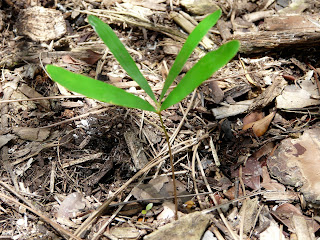 I could never understand how all the squirrels and birds were eating the seeds, (fun to watch!) but still I had baby coonties sprouting up all over the place. Finally someone explained to me that what the animals are eating is the orange flesh surrounding the seed. The seeds themselves are left to grow where scattered, a pretty neat system. If you scatter seeds yourself, some say scarification is useful, and use rubber gloves to protect from irritants that may be present in the flesh.

Coonties look a lot like ferns, but they are actually cycads, like the cardboard plant and the sago palm. Cycads, back in the day of the dinosaur, were the dominant plant type, and many people call them "living fossils."

When it get to the latin name, experts agree on starting with 'Zamia,' but as I mentioned earlier, the names "pumila," floridana," and "integrifolia," are used after zamia by different sources. When you go to buy one, you will be getting a native coontie no matter which name is used, as long as your source is a reliable one.  Highly recommended! Go out and get growing!

Susan said…
We just bought 2 at the native plant sale at Alliance for the Arts yesterday Can't wait to get them in the ground.
October 11, 2015 at 3:39 PM

Anonymous said…
Be very careful around these plants. Our Dachsund puppy almost died from eating a Coontie seed. It was the most agonizing 72 hours I have ever spent waiting to find out if she would die of liver failure. It is highly toxic to dogs and children. Vets see dog poisoning regularly from these plants because owners do not know how toxic they are. If you have children or pets please do not include this plant in your landscaping.
December 1, 2015 at 8:24 PM

Treble Hook said…
Most animals can detect toxicity especially dog and cats. Lived in Florida my whole life and landscaped yard and know growers. Never seen an incident and one where the dog regurgitated and was sick for a day.
October 21, 2016 at 6:21 PM